It wasn't so long ago that, when it came to file sharing across platforms and devices, anarchy was the order of the day.

It's a wonder anything got done.  There must be a better way.

At least, that's what the bright minds of Team Camelot were convinced. Spearheaded by John Warnock, one of the Adobe Systems founders, Team Camelot was tasked with creating a new file format. One that would render a file accurately - whether you were using Mac, Windows, MS DOS or UNIX. One that would look the same on screen as it would when printed.

And the result? A file format that is used today by hundreds of millions, every day, around the world, in almost every industry.

Ladies and gentlemen, the PDF.

PDF, or Portable Document Format, was the first file format of its kind to store and share text and images in a manner that would preserve the formatting of the original document. Regardless of which software, hardware or platform it is being viewed on.

For example, if the original document was created on a Mac, it could easily be sent via email to a colleague using Windows, and they'd be able to see the exact same visual. And vice versa.

Today's online tools can convert almost any file format to a PDF - whether it's a Powerpoint spreadsheet, Keynote presentation or a scanned, text-based form. This is helpful not only in creating crisp, easy-to-share presentations with co-workers, but can be used to share - and complete - business forms as well. This ability makes PDF an ideal tool for the 'paperless office'. PDF users can edit a PDF form directly on their computer, saving the unneccessary waste of time, paper and the need to re-scan completed documents.

Inspired by the idea of digitizing the contents of the Library of Congress, Warnock's Team Camelot expanded to include developers with a diverse range of coding skills to build the platform-agnostic file format. Not only would the file format need to be compatible with the most popular platforms, they also needed to have developers that had experience working with printer drivers. It was this additional element that eventually helped to boost PDF's popularity around the globe - users everywhere could choose to 'Save as PDF' instead of printing out the document.

The team created the initial version of the format in roughly a year, but the public launch would wait until June 1993 - in tandem with Adobe Acrobat Version 1.0. Acrobat was released to huge fanfare, and as the first program with the ability to read the file format, it's adoption was crucial to the initial success of PDF.

Of course, things don't always go quite as planned. Rather than being a runaway hit, the format's adoption was slow - hindered partly by the lengthy download times facing users in the early days of the internet, and the need to purchase Acrobat in order to create PDFs and share them.

However, the team continued to develop the format - adding new features like editing, form functionality and web display - that would prove to be useful as the internet gained more of our attention, and was incorporated in to more of our business lives than ever before.

The ongoing development of PDF now continues under the umbrella of the International Organization for Standardization, with the Adobe team acting in an advisory role. And PDF evolves to this day - with new tools like support for e-signatures, and the ability for users to work with the format on touch-screens.

What's truly extraordinary is that the PDF file format has lasted, while technologies - both software and hardware - that we would have assumed to be the gold standard have been replaced by newer, more modern answers. It's the grandaddy of file formats. But don't take my word for it - here's a quick look back at some of the raddest things around in 1993: 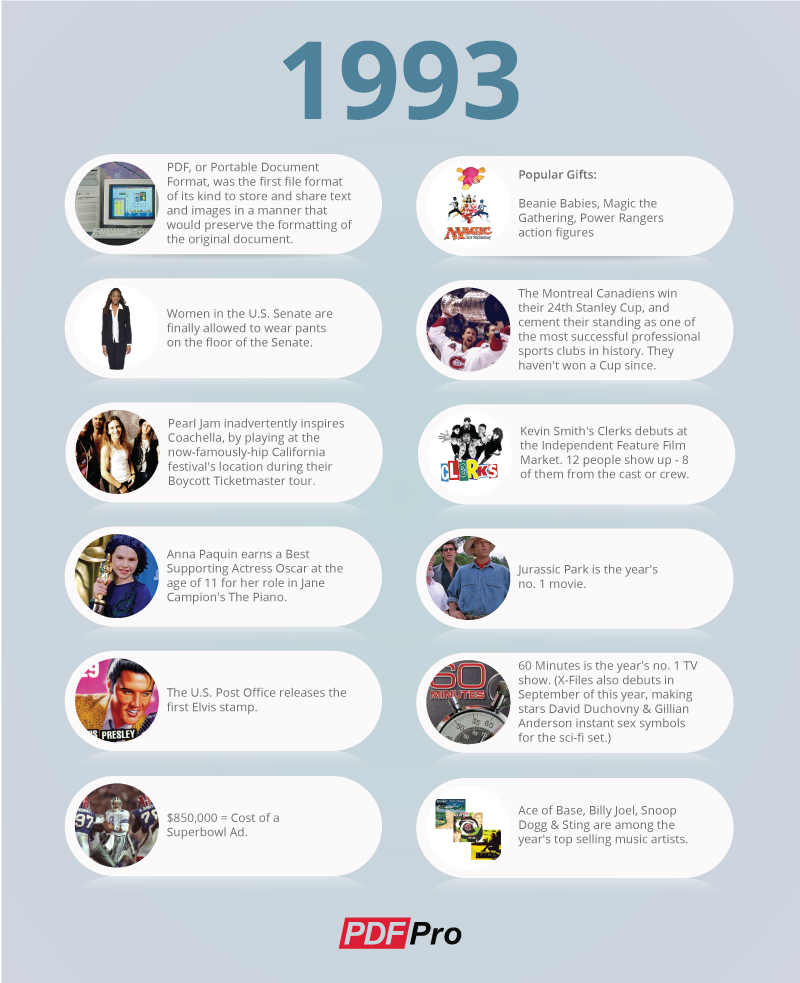